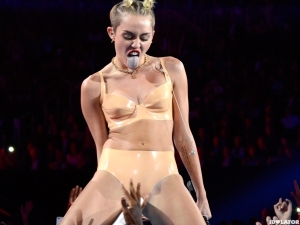 Miley’s performance at the VMAs was shocking, in many ways.

It was inappropriate sure -but the organisers made it very clear that they cared not when they mixed in her performance with a very strange song, accused of being a bit rapey, sung by a 36 year old father of two.

The fact that there was a precession of women in 90s dance outfits surrounding ‘rappers’, that the choreography used black women’s bodies as props and that there wasn’t a woman on stage in the full 20 minutes that wasn’t semi naked or bending over – added up to a dated, sexist and just plain shit performance.

Classically, the object of our outrage is directed towards 20 year old Miley. Slutshaming is still alive and well. I’m not voiding her of any responsibility, suggesting that she wasn’t fully immersed in every decision (although that feels unlikely) or suggesting she isn’t proud of herself. In fact I’m sure she is, check out her latest VMA tweet:

“Smilers! My VMA performance had 306.000 tweets per minute. That’s more than the blackout or Superbowl! #fact.”

I just think she may not feel this way in 6 years time.

Shouldn’t the main question be who the hell signed this all off?

Whoever it was has made lots of money and we keep talking about it and affirming their actions. Oops! Maybe it’s us that are being exploited as no one in this mix was naive to the controversy it would create.

All the above points need discussing and I agree with their importance but one thought in particular keeps popping into my head.

I have to admit this otherwise I’m a judgemental hypocrite that casts my opinion without any reference to my own actions.

Now would I want everyone to see this? No. Do I deeply regret this and loathe myself? No. Did anyone make any money off my moves? Also, no.

I don’t think that we should tell anyone how to dance or that a style of dancing is restricted to one culture in particular but I do think that we need to take responsibility for and look after our young people.

Right now, we put the likes of Geordie Shore’s Holly Hagen on reality TV at 18, fill her full of booze and let her sexual escapades play out as men mock her but line up for blow jobs. I’m all about free choice but who is responsible for and profiting from this? And why aren’t we asking them the big questions?

Yes Holly Hagan signed up for this, no one is actually physical forcing her and she makes a tidy profit from her actions. However, when she actually came out in defence of this type of criticism…read it here… she was controlled even then as it was written by someone else FOR Holly. I don’t think you miss the contradiction.

Ok, so Holly Hagan is a more extreme case than Miley’s grinding- twerk show. No one was filming Miley blow jobbing. That we know of.

The thing is, Miley probably doesn’t know herself yet and this is my point. Being in your late teens/ early twenties is one big humiliating mash up of trying to be the person you think you. Yet it’s also a time for exploration and forms who you are.

We shouldn’t be ashamed of this and we definitely shouldn’t deny it ever happened to us.

The real problem with this is ‘situation’ is that millions watched. Those watching will judge her or emulate he and those making the whole thing worse are profiting big time.

Of course, we shouldn’t put an age limit on what people want to do with their lives but shouldn’t we be extending a kinder, more protective hand? I can tell you now, that’s exactly what the MTV folks will be pretending to do in order to tweak their moral compass.

Should we allow the big cheeses to create a platform which takes advantage of these young people?

Should we allow Miley the grace we afford ourselves by not judging her and admitting, we have all, in one way or another done a 20 year old Cyrus?