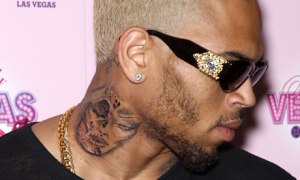 Sat on the bus one morning reading my Guardian app (see by choice of newspaper I AM a feminist) I read the following article: ‘The Chris Brown iPhone app: resistance is useless’ which discusses the newly developed mobile app which harnesses all that is Chris Brown into one useful place thus improving the lives of all Breezy fans.

Upon finishing the article, even though it wasn’t necessarily vicious, the familiar feeling of sadness came over me once again. It’s been happening frequently when reading about this man and I’ve kept it quiet for fear of being pelted with heavy objects.

As the media perpetually poke him with sticks, sneer and scorn him for anything that he does I want to WANT join in.

“KILL THE PIG” the Lord of the Flies children might shout. “He deserves all he gets the low life. Rehabilitation? Bullshit. Just hang him high and kill him.”

Too harsh? Well that’s the message we are sending.

After being beaten by Chris Brown fearful of becoming a victim/her PR seeing an opportunity – she releases the song S&M, refers to herself and all her female friends as ‘bad bitches’ and perpetually thrusts at passers by.

I get it; she is gaining empowerment through her sexuality. I’m not criticising, I bloody love Rihanna but I sometimes feel like as a fan I am somehow reinforcing that she needs to be a ‘bad bitch’ and constantly tweet pictures of herself topless for me to respect her.

There is always an undertone of sadness attached to Rihanna that makes her loveable. She ‘just wants to be loved’ she sings and I, I just want to show her love to fix her! As do the rest of the media world “Poor RiRi” we wail…then we pat her on the back for behaving like a sadist sex-fanatic- stand back and watch her spiral with enjoyment.

I recognise we are treating her badly and she is in no way deserving.

However, when it comes to Chris Brown we/the media take it to a higher level. He will forever be known as a monster. This ‘monster’ was a child once. He was a child who was abused by his Step-Father. He witnessed the abuse of his mother and was a child star thrown into the overly sexed hyper masculine world of R&B/Rap. He too is reinforced by the way the media treat him. The worse he behaves the more attention he gets. The higher his record sales go.

It’s not just us, it’s him. He makes it so easy to have a crack at him. He just lowers his head into the stocks. On and on it goes…

What frustrates me though is the way my most admired friends and idols, the media and in the past, ME, treat him. What do we expect to happen to him? He did something horrendous. He experienced something horrendous but is he an unequal victim of the patriarchy because he is a man? Well that’s not very equal.

My stomach turns as I hear him still behaving like a violent, womanising fool as I ask ‘are you not fixed yet?’

Yet I see no harm in ROFLing with my pals as we share another ingenious slamming article that condemns him, his music and anyone who listens to him. KILL THE PIG!

Let’s say he can’t forgive himself and we won’t forgive him- how does he come back and earn our respect? Be quiet, repenting and distraught forever? Well there is no money in that. To the media, it’s boring. Wave bye -bye to your career.

We need to decide what sort of punishment is appropriate for someone like him. Do we kick him off the planet onto a more fitting one with all the lost boys?

Why is everyone so shocked that he seems to have got worse rather than better when we treat him like a piece of shit? Tell someone they are worthless scum long enough and that is what they will become. I don’t need to tell anyone this. It’s an understood snippet of pop psychology, so why are we so surprised?

Now I know what the impending response to this is, what he did was unforgivable but we have to stop standing back and pointing the finger at all these lesser people. We must take responsibility for what our patriarchal society does to men as well as women or we will never win.

If there is no way back to ‘purity’ in the eyes of western people then there is no point in him trying. We reinforce his detrimental, self-destructive behaviour and ignore any attempts to right his wrongs. We send the message at scale that forgiveness will never, ever happen.

I don’t have the answer but I know that applauding ourselves and those who take the biggest kicks is shameful and I am ashamed.

3 thoughts on “I feel sorry for Chris Brown. Sssshh!”